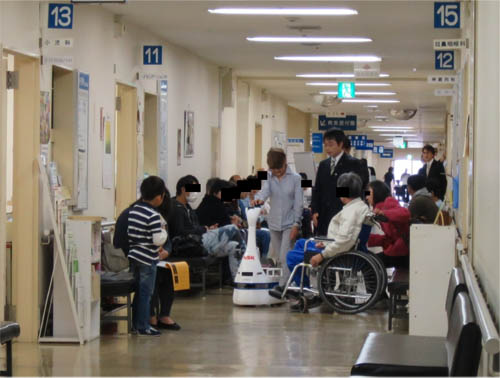 Situation of the examination by the visually impaired

We developed a robot that can guide visually impaired people and elderly people as they walk around in large hospitals. In relation to this, a previous report described the structure of a guidance robot and the comparison of its use with that of a white cane. It was shown that with the use of the robot, participants could move more easily, safely, and confidently than with a white cane. However, to solve the problems encountered with the use of the previous robot, a new guidance robot was fabricated. This paper describes the structure of the new robot and the results of the demonstration examination of the robot in the Kanagawa Rehabilitation Center. The robot navigates to reach a destination set by using the touch panel, whereas velocity depends on the force exerted by the user on the robot. The questionnaire answered by the participants were evaluated using the system usability scale, which showed that the acceptability range of the robot is “Acceptable” and its usability is high.