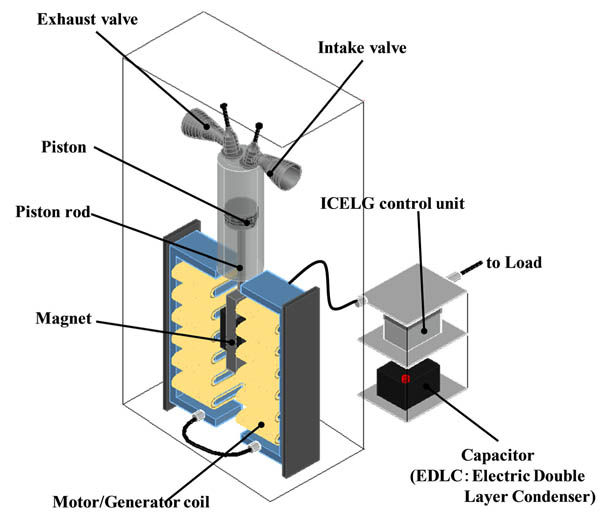 In this paper, a novel generator engine designed to achieve high efficiency, which we call an internal combustion engine with linear generator (ICELG), is proposed and its feasibility and validity are demonstrated using a simulator. Unlike conventional crank-type engines, the ICELG employs a linear motor, which is directly connected to the piston-cylinder unit, instead of a crank mechanism, thus eliminating the motional constraints. This allows the stroke to be changed in mid-operation. The simulator is based on a model of the DC motor and consists of the motor model, which combines the actuator and generator, the engine model, which computes the state changes in the cylinder, and the charge/discharge model, which computes the energy charge and discharge. The ICELG’s feasibility is evaluated by determining the energy losses and charge in the respective models. It is possible to extract a greater amount of energy in the combustion stroke by lengthening the stroke. Losses can be reduced during the intake and exhaust strokes by operating at low speed in order to prevent drastic pressure changes in the cylinder. During the compression stroke, the inertial energy is stored when the pressure in the cylinder is still low, and then subsequently released as inertial force beyond the position from which it can complete the combustion stroke, as a result of which the motor resistance loss is reduced. It was found that the ICELG achieves higher efficiency than conventional generator engines when operated in this manner.