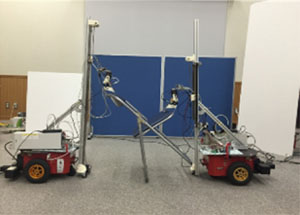 In this study, we present a novel framework to address the problem of teaching manipulation tasks performed by a single human to a set of multiple small robots in a short period. First, we focused on classifying the manipulation style used during a human-performed task. An allocator process is proposed to determine the type and number of robots to be taught based on the capabilities of available robots. Then, according to the detected task requirements, robot behaviors are generated to create robot programs by splitting human demonstration data. Small robots were used to evaluate our approach in four defined tasks that were taught by a single human. Experiments demonstrated the efficiency of the method to classify and judge whether the division of a task is necessary or not. Moreover, robot programs were generated for manipulating selected objects either individually or in a cooperative manner.
Cite this article as:
Jorge David Figueroa Heredia, Jose Ildefonso U. Rubrico, Shouhei Shirafuji, and Jun Ota, “Teaching Tasks to Multiple Small Robots by Classifying and Splitting a Human Example,” J. Robot. Mechatron., Vol.29, No.2, pp. 419-433, 2017.
Data files:
References