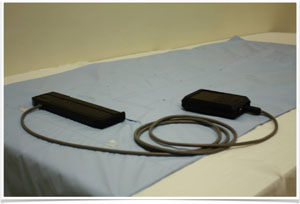 In this study, we propose an excretion detection system, Lifi, which does not require sensors inside diapers, and we verify its capabilities. It consists of a sheet with strategically placed air intakes, a set of gas sensors, and a processing unit with a newly developed excretion detection algorithm. The gas sensor detects chemicals with odor in the excrement, such as hydrogen sulfide and urea. The time-series data from the gas sensor was used for the detection of not only excretion, but also of the presence/absence of the cared person on the bed. We examined two algorithms, one with a simple threshold and another based on the clustering of sensor data, obtained using the k-means method. The results from both algorithms were satisfactory and similar, once the algorithms were customized for each cared person. However, we adopted the clustering algorithm because it possesses a higher level of flexibility that can be explored and exploited. Lifi was conceived from an overwhelming and serious desire of caretakers to discover the excretion of bed-ridden cared persons, without opening their diapers. We believe that Lifi, along with the clustering algorithm, can help caretakers in this regard.
Cite this article as:
Y. Ui, Y. Akiba, S. Sugano, R. Imai, and K. Tomiyama, “Excretion Detection System with Gas Sensor – Proposal and Verification of Algorithm Based on Time-Series Clustering –,” J. Robot. Mechatron., Vol.29, No.2, pp. 353-363, 2017.
Data files:
References