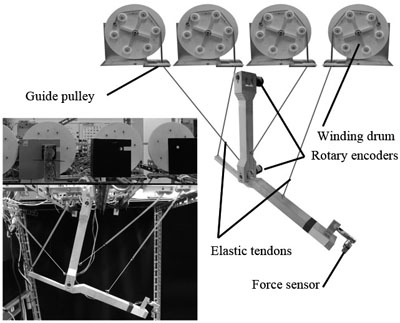 This paper presents a low-cost, lightweight robot arm with very low stiffness actuated by elastic tendons. To simplify the string tension control, a new winding device was developed. Small pulleys were incorporated into the winding drum to reduce friction between the tendon and the drum. A marionette-style two-link robot arm with compliant joints was prototyped. Because the arm and winding devices were separate from each other, the cost and weight of the robot were reduced. The links are made with lightweight wood connected by simple shaft joints. The robot design can be easily modified by the user because the mechanical parts do not require high machining accuracy. This robot is intended for implementation in tasks that do not require high positioning accuracy using a simple force control under environmental constraints. Because of its low stiffness, simple and sensor-less force control can be easily implemented based on the relationship between forces under static conditions. The proposed simple control method was evaluated experimentally by conducting position, static force, and hybrid position/force control tasks and was shown to perform well. The results also demonstrate that employing additional sensors, such as a camera, improves the accuracy of the controller.
Cite this article as:
J. Togashi, K. Mitobe, and G. Capi, “Control of Low-Cost Customizable Robot Arm Actuated by Elastic Tendons,” J. Robot. Mechatron., Vol.28, No.4, pp. 509-522, 2016.
Data files:
References