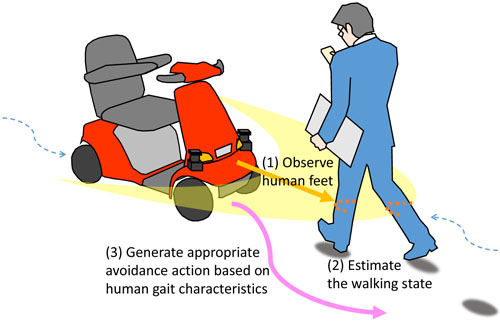 When two pedestrians pass one another on busy intersections or pedestrian crossings, they may try to avoid each other by moving in the same direction. Such behavior becomes a factor hindering a smooth walking. When robots will come to be used in our immediate environment in the future, similar situations are likely to occur. The objective of this study is to determine the appropriate avoidance action (direction and timing) that a robot should take in order to minimize the risk of coming face to face with a pedestrian, in situations where the two parties, who share a common travel line, pass one another. First, two experiments were conducted using human subjects to investigate the walking tendencies (gait characteristics) when a person walks past another oncoming person. Here, we examined the relationship between the landed foot and the direction in which it is easier to move and the tendencies of the avoidance direction when a person makes a sudden move to avoid another oncoming person. Based on the results, we proposed the avoidance action that the robot must take when it passes a human pedestrian, and confirmed its effectiveness through a verification experiment.
Cite this article as:
T. Tomizawa and Y. Shibata, “Oncoming Human Avoidance for Autonomous Mobile Robot Based on Gait Characteristics,” J. Robot. Mechatron., Vol.28, No.4, pp. 500-507, 2016.
Data files:
References