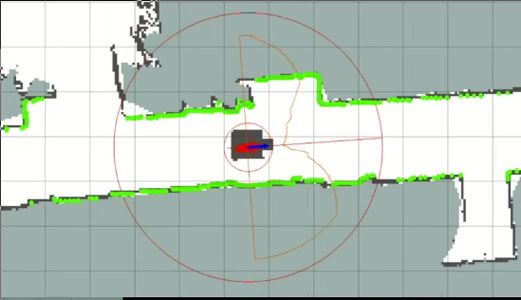 Appearance of the kinematics simulator

A kinematics simulator for an autonomous mobile robot has been proposed to simulate complicated motions such as those caused by the interaction between a robot and its environment in terms of geometric relationship. The simulator is expected to assist in the development of a robot control system for autonomous running in the real world. This paper presents the simulator concept, its basic configuration, and the results of preliminary simulation experiments, which have been performed to evaluate a simple motion model, and an environment model based on occupancy grid maps and a laser range finder pseudo sensor model consisting of a typical probabilistic density. The results of the simulation experiments using the aforementioned multiple models are also presented to demonstrate that the simulator can perform in various numerical environments.
Cite this article as:
K. Shimane, R. Ueda, and S. Tarao, “Prototyping of Kinematics Simulator for Supporting Autonomous Mobile Robot Development,” J. Robot. Mechatron., Vol.28, No.4, pp. 470-478, 2016.
Data files:
References