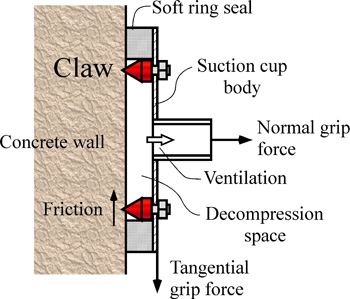 Efficient economical test methods are widely needed worldwide. One target of this is to develop climbing robots that check for defects in concrete. These concrete-wall-climbing robots generally use suction cups to support themselves and test apparatus, but the danger exists of this expensive equipment falling. This may occur due to one of two reasons. The first is inadequate ring-seal decompression in suction cups and the second is suction cup slippage. We have added claws to suction cups to help prevent slippage. The claws we developed are attached to the suction cups to help grip the wall. In the sections below, we discuss the scratch tests we performed to test claw effectiveness in improving suction cup grip. We then prove through tests under actual conditions that the estimated grip force matched that of an actual suction cup’s grip force with the claw.
Cite this article as:
S. Tokuomi and K. Mori, “Suction Cup for Concrete Wall Testing Robot,” J. Robot. Mechatron., Vol.28, No.2, pp. 194-197, 2016.
Data files:
References