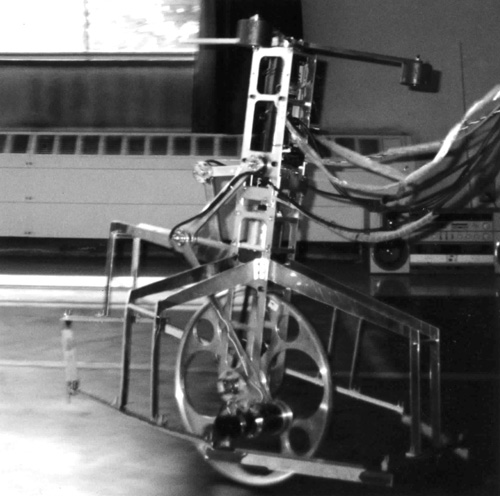 This paper introduces the first successful development of a robotic unicycle imitating a human rider. The robot consists of a body supported on a single wheel, a closed linkage on each side of the body to drive the wheel, and a rotor on the top. The effects of the closed link, gyro effect, centrifugal force, and reaction torque of the rotor on the robot’s stability and direction were investigated in simulations and experiments. Stability and drive principles of the robotic unicycle were proposed. The unicycle accelerated or decelerated because of the location of the compound center of gravity. Direction control was proposed based on the proposed acceleration control rule and a specified yaw angular velocity. Using that rule, drive simulations of tracing a circle and a “number 8” were conducted. The computer simulations demonstrated stable driving of the robotic unicycle. The experimental evaluation, velocity, and direction control of the robot were also studied. The principles of postural stability and driving of the robotic unicycle were clarified.