Multiple Rotors Hovering Near an Upper or a Side Wall 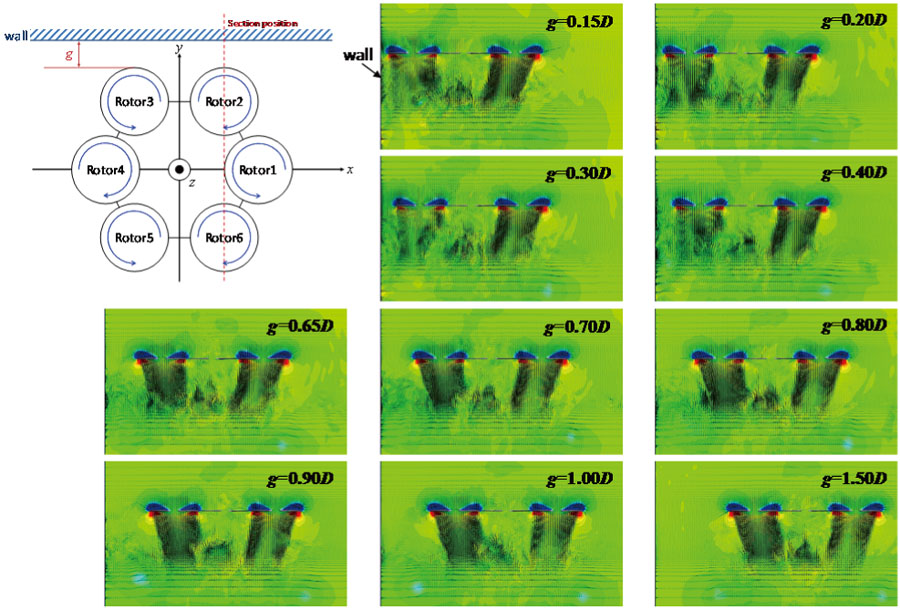 Flow fields of hexa-rotors near the side wall

The influence of walls on the performance of multiple rotor type drones is numerically simulated. With the current wide-spread applications of autonomously flyable UAVs, there are potential needs to use the drones for inspections and observation near various structures, such as buildings and bridges. The flow fields around multiple rotors are influenced significantly by the existence of an upper or a side wall, so that the thrust, required torque, and other forces and moments are changed. It is found that when a rotor approaches an upper wall, as the distance between the rotor and the upper wall is less than a diameter of the rotor, the thrust suddenly increases, which causes the rotors to collide with the upper wall. When an isolated rotor is operated near a side wall, the thrust decreases and a rolling moment appears to tilt the rotor toward the wall as the distance becomes shorter. For a multiple rotor drone near a side wall, the rotors have different distances from the wall, which causes the whole aircraft tilts toward the wall. From the perspective of safety operations, the multi-rotor drone should be kept away from both the upper wall and the side wall at a distance of at least 1.5 times of the rotor diameter to prevent unexpected motions of the aircraft caused by the wall during hovering flight.