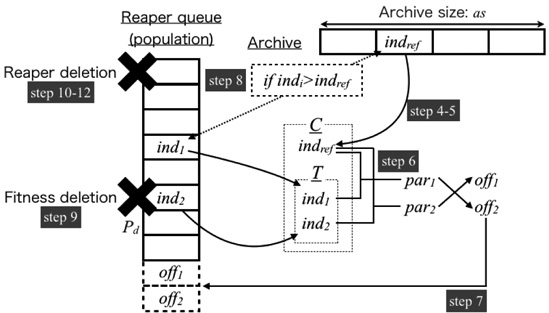 An illustration of the proposed method

This study proposes a novel genetic programming method using asynchronous reference-based evaluation (called AREGP) to evolve computer programs through single-event upsets (SEUs) in the on-board computer in space missions. AREGP is an extension of Tierra-based asynchronous genetic programming (TAGP), which was proposed in our previous study. It is based on the idea of the biological simulator, Tierra, where digital creatures are evolved through bit inversions in a program. AREGP not only inherits the advantages of TAGP but also overcomes its limitation, i.e., TAGP cannot select good programs for evolution without an appropriate threshold. Specifically, AREGP introduces an archive mechanism to maintain good programs and a reference-based evaluation by using the archive for appropriate threshold selection and removal. To investigate the effectiveness of the proposed AREGP, simulation experiments are performed to evolve the assembly language program in the SEU environment. In these experiments, the PIC instruction set, which is carried on many types of spacecraft, is used as the evolved assembly program. The experimental results revealed that AREGP cannot only maintain the correct program through SEU with high occurrence rate, but is also better at reducing the size of programs in comparison with TAGP. Additionally, AREGP can achieve a shorter execution step and smaller size of programs, which cannot be achieved by TAGP.