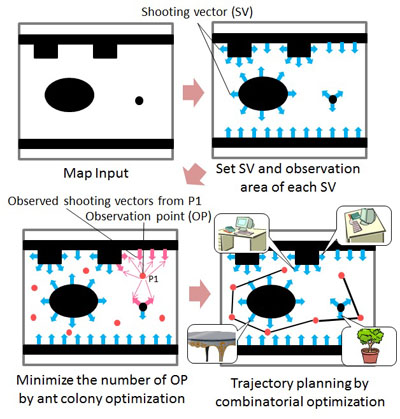 Trajectory planning for automating the appending of image information

A technique for automating the Image-Information-Added Map, a mapping method for photographing an object at a required resolution, is proposed. The picture shooting vector indicating the angle for taking a picture with sufficient resolution is defined according to the shape of the object surface, and the operator controls a robot remotely to acquire pictures by checking the picture shooting vector in our previous study. For an automated inspection system, image acquisition should be automated. Assuming a 2-D grid map is prepared, first, the shooting vectors are set on the surface of the object in the map, and the picture shooting areas are defined. In order to reduce the number of the points that the mobile robot moves to to take pictures, an overlapping picture shooting area should be selected. As the selection of the points where pictures are taken is a set covering problem, the ant colony optimization method is used to solve it. Edge Exchange Crossover (EXX) is used to select picture taking points that are connected for efficient checking. The proposed method is implemented in a robot and evaluated according to the resolution of the collected images in an experimental environment.