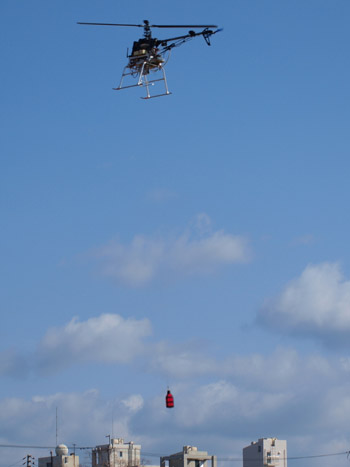 A small-size helicopter with a suspended load

In this study, a cable-suspended transportation system using a small-size helicopter was investigated. For a secure flight, it is necessary to suppress the swing of the suspended load. For this purpose, a cable angle feedback system was adopted because it is easy to mount the corresponding measuring device on a helicopter. Delayed feedback control was applied for efficient swing damping. The control parameters were obtained using a simple planar double pendulum model that takes into consideration the coupled dynamics of the helicopter and the load. To build the model, the system parameters were identified through frequency response flight tests. In this paper, an appropriate design strategy is reported for a trade-off relationship between vibration damping and piloted handling qualities; the robustness of the control method against disturbances and signal noise was verified by comparing the delayed feedback control method with the real-time angular velocity feedback control method. The damping effect was verified by performing flight tests with three cable lengths.
Cite this article as:
M. Sonobe, M. Miwa, and J. Hino, “Effectiveness of Delayed Feedback Control Applied to a Small-Size Helicopter with a Suspended Load System,” J. Robot. Mechatron., Vol.28, No.3, pp. 351-359, 2016.
Data files:
References