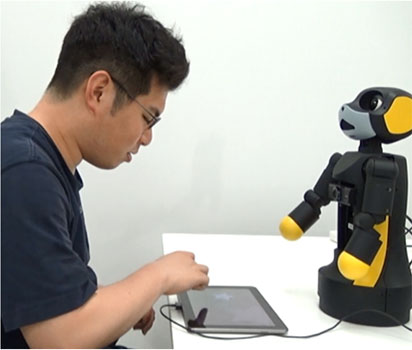 This study aims to investigate the behavior of a person who teaches a robot, and the behavior required for the robot to learn from such a person. A robot used for education needs to have a pedagogical relationship, namely, to understand the roles of teacher and learner, and recognize user behavior. In order for a robot to establish a pedagogical relationship with people, it has to understand the characteristic behavior of the person teaching it. Moreover, the robot needs to demonstrate to its “teacher” the characteristic behavior learned from this person. For this purpose, we observe and analyze through case studies the characteristic behavior of a human teacher and the effectiveness of the behavior designed for the robot. The results of the observation and analysis of a situation where a person teaches a robot a game on a tablet device show that, as the robot attempted through trial-and-error to perform the actions learned from the human teacher, the latter became more careful when teaching, and attempted to verify what the robot expressed to show its human teacher how much it understood.
Cite this article as:
H. Okazaki, Y. Kanai, M. Ogata, K. Hasegawa, K. Ishii, and M. Imai, “Toward Understanding Pedagogical Relationship in Human-Robot Interaction,” J. Robot. Mechatron., Vol.28, No.1, pp. 69-78, 2016.
Data files:
References