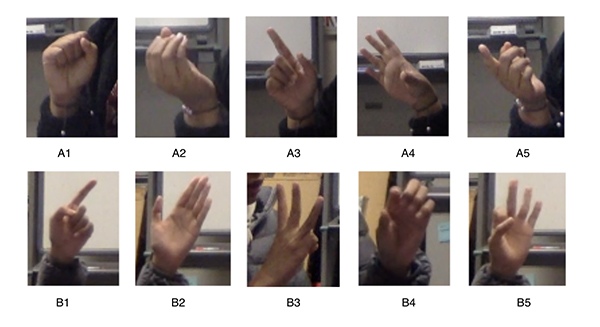 In this paper, considering the characteristics of hand gestures that occur during a natural, unscripted human conversation, we report the results of experiments involving the data analysis of the video recordings of experiments. The recorded conversations between two subjects and the assistant in the experiments (the first author) are analyzed for findings that might be useful to future human-robot interaction (HRI), findings regarding the recognition of hand gestures in natural conversations. In the experiment, hand gestures that appeared naturally during the conversations were manually selected, and their elapsed times and number of appearances were analyzed. In addition, these unscripted conversations were analyzed with a voice recognition system, and the meanings of the hand gestures that appear in the recorded video were interpreted. It was observed that some gestures were made consciously and others unconsciously. Some gestures appeared multiple times with similar meanings and the same intention, especially gestures involving pointing at something to emphasize a sentence or word. Other observations included that there were times when (i) each subject made different hand gestures to convey the same meaning, (ii) both subjects made the same hand gesture but intended different meanings, and (iii) a specific gesture was made by the same subject but with different intended meanings. After considering the results of these experiments, we conclude that it is better to combine gestures with the utterances at the time in order to interpret their intended meanings correctly.