It is our great pleasure to present the Fourth JDR Award to Professor Nobuo Shuto for his outstanding contributions to the Journal of Disaster Research (JDR) as the Honorary Editor.

Professor Shuto, Professor Emeritus of Tohoku University, is a pioneer of the theoretical study of tsunamis. He has also made a large contribution to the development of numerical simulations, visualization through computer graphics, and other critical techniques for the study and control of tsunami disasters. The development of tsunami disaster reduction and management that we have today is thanks in large part to his achievements.

On behalf of the JDR editorial board, I wish to thank Professor Nobuo Shuto for his efforts and to congratulate him as the winner of the Fourth JDR Award.

After the 1960 Great Chilean Tsunami, coastal dikes were remodeled and new ones constructed in Japan. In 1968, immediately after the completion of those construction and remodeling works, the Tokachi-Oki Earthquake struck, but fortunately the structures involved sustained very little damage. This led to a general feeling that it was possible to protect against the tsunamis completely by simply building coastal dikes and other defense structures. Japan did not see an increase in the number of tsunami researchers, but things were worse in the U.S. The National Science Foundation allocated its tsunami-related budget only to the NOAA, which issues tsunami forecasts, and allocated the rest of the budget entirely to ocean development. This situation continued until the 1983 Nihonkai-Chubu Earthquake Tsunami struck. In 1992, there was a tsunami earthquake off the coast of Nicaragua. Following that, research was conducted based on international cooperation through fax communications. Then cooperative international research continued to be done on tsunamis such as the 1992 Flores Tsunami, the 1993 Hokkaido Nansei-Oki Earthquake Tsunami, and the 1996 Irian Jaya Tsunami. However, their findings were provided only through Proceedings of the International Tsunami Symposium every two years, and most of the findings were limited to factual information about tsunamis.

Requests for information on tsunamis rapidly increased after the 2004 Great Indian Ocean Tsunami, information not only on the tsunami itself but also on tsunami countermeasures. It was when JDR made its appearance. The JDR disseminated the latest information for practical use. It also benefitted those who were the sources of information, as they no longer had to deal with the frustration of having to wait for conferences held only every two years. In addition, the JDR reviews submissions
much more quickly than do other journals. Tsunamis, such as the 2011 Great East Japan Earthquake Tsunami and the 2018 Sulawesi Earthquake Tsunami, continue to strike. As a platform for sharing knowledge related to reconstruction and countermeasures, as well as to tsunamis themselves, the importance the JDR is growing.

This is why you are encouraged to contribute to the JDR.

We announce that the Fourth JDR Award was won by Professor Emeritus Nobuo Shuto, Tohoku University, Japan. We congratulate the winner and sincerely wish for future success. 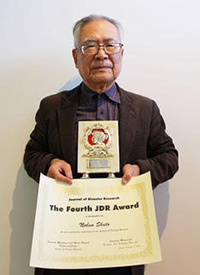 Photo: Prof. Shuto received the certificate and the plaque of the Fourth JDR Award. 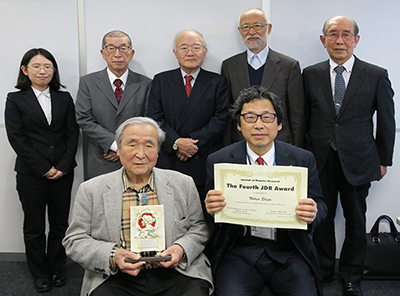 Photo: The JDR editorial boards were pleased to give Prof. Shuto the award. From the left in the front row, Dr. Suminao Murakami and Dr. Haruo Hayashi, Editors-in-Chief; from the left in the back row, an editorial staff, Dr. Yuichiro Ogawa, Dr. Katsuki Takiguchi, Dr. Hideaki Karaki, and Dr. Sumio Shinoda.