It is our great pleasure to present the fifth JDR Award to Dr. Yuichiro Usuda. Dr. Usuda has made outstanding contributions to the Journal of Disaster Research (JDR) as the guest editor and the author of the JDR’s “Special Issue on NIED Frontier Researches on Science and Technology for Disaster Risk Reduction and Resilience 2017” in Vol.12 No.5, which has been the most downloaded special issue for the past three years.

Dr. Usuda is a leading scientist in frontier research for natural disaster risk management and resilience in National Research Institute for Earth Science and Disaster Resilience (NIED). He is working with researchers of many different disciplines as well as stake-holders in practical devastating disaster management situations. Thus, in his studies, he has been integrating many different disciplines to generate a new intellectual paradigm for managing multi-hazard disasters, such as earthquake disasters combined with meteorological disasters caused by rain, drought, snow, extreme heat or cold, ice, or wind. This is quite important in Japan and other disaster-prone countries, considering today’s global climate change. The special issue is the fruit of his research efforts.

On behalf of the JDR editorial board, I wish to thank Dr. Yuichiro Usuda for his efforts and to congratulate him as the winner of the fifth JDR Award.

I would like to express my sincere appreciation for the honor of receiving this prestigious award. The award has been presented to me for the “Special Issue on NIED Frontier Researches on Science and Technology for Disaster Risk Reduction and Resilience 2017” of JDR Vol.12 No.5, for which I was the guest editor. I heard that this special issue has been the most downloaded over the past three years.

NIED, to which I belong, is an institute that deals with natural disasters comprehensively. Since 2016, we have been working to become a “core organization for innovation in disaster resilience science and technology” as a new seven-year plan. Japan is a country prone to disasters, with many large-scale natural disasters occurring every year. Recent examples would be the 2016 Kumamoto Earthquake, 2017 Nasu Avalanche, Northern-Kyushu Heavy Rain, 2018 Eruption of Mt. Kusatsu-Shirane, Western-Japan Heavy Rain, Hokkaido Eastern Iburi Earthquake, and 2019 Typhoon #19. We should collect “intelligence” related to natural disasters in multiple fields to reduce our disaster risk and improve our resilience.

The Special Issue is a compilation of research results from individual fields. I am elated that the first special issue of NIED has gained such attention. NIED will continue to conduct research across multiple fields. We hope that NIED’s activities will lead to collaboration with many people and that the integration of intelligence will improve disaster resilience in Japan and all over the world.

The Fifth JDR Award ceremony was held in Kanda, Japan, at December 18, 2019 and a prize were given to Doctor Yuichiro Usuda, National Research Institute for Earth Science and Disaster Resilience (NIED), Japan. We congratulate the winner and sincerely wish for future success. 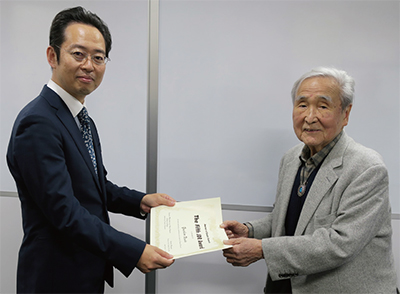 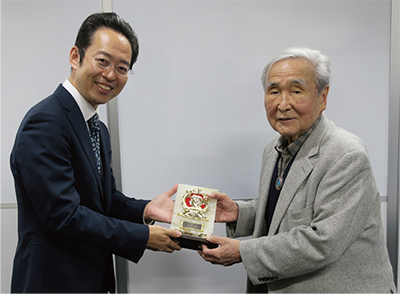 Photo: The JDR Award certificate and plaque were handed from the Editors-in-Chief, Dr. Suminao Murakami (right) to the winner, Dr. uichiro Usuda (left). 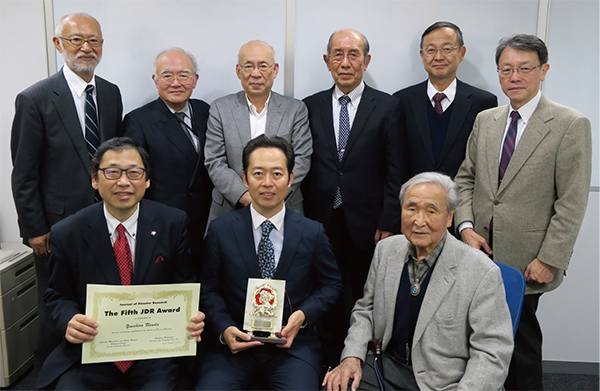 
*This site is desgined based on HTML5 and CSS3 for modern browsers, e.g. Chrome, Firefox, Safari, Edge, Opera.