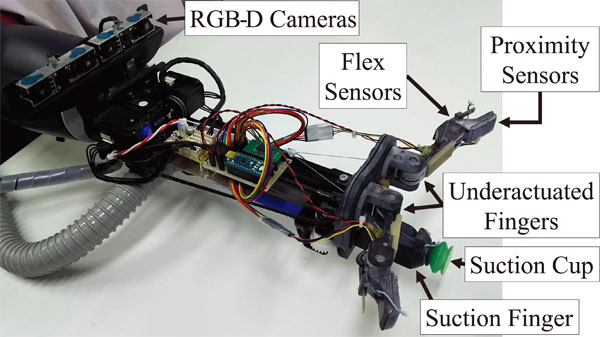 Overview of the Suction Pinching Hand

For warehouse automation, stocking items in storage shelves (stowing stage) and picking them off the shelves (picking stage) should be automated. To achieve this, we propose a Suction Pinching Hand, an unstable-to-stable transformation (UST) strategy, and an entrance passing (EP) strategy. The Suction Pinching Hand has two underactuated fingers and one extendable and foldable suction finger whose fingertip has a suction cup. The suction finger is useful during the picking stage to enter and manipulate various objects in a cluttered narrow space, with such spaces being typical in efficient warehouses. As this manipulation is sometimes unstable, the underactuated fingers are used simultaneously to stabilize the grasp after the suction finger moves the object to a relatively open space. The UST strategy realizes the transition from unstable object manipulation in a narrow space to stabilization in a relatively open space. In the stowing stage, proximity sensors in the underactuated fingers are used to sense when the object is touched, for securing a direct pinching motion executable in the stowing stage. Finally, the EP strategy ensures that the picked object is able to pass through the entrance of the shelf bin and be successfully stowed. Experiments demonstrate both the ability of our robot hand to grasp various objects stably and safely, and the effectiveness of the UST and EP strategies during the picking and stowing stages.