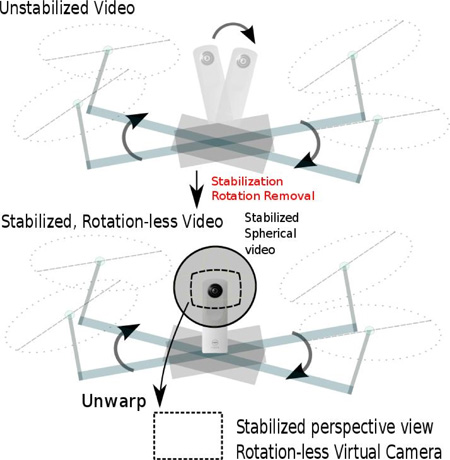 We propose a method for stabilizing spherical videos by estimating and removing the effect of camera rotation using dense optical flow fields. By derotating each frame in the video to the orientation of its previous frame in two dense approaches, we estimate the complete 3 DoF rotation of the camera and remove it to stabilize the spherical video. Following this, any chosen area on the spherical video (equivalent of a normal camera’s field of view) is unwarped to result in a ‘rotation-less virtual camera’ that can be oriented independent of the camera motion. This can help in perception of the environment and camera motion much better. In order to achieve this, we use dense optical flow, which can provide important information about camera motion in a static environment and can have several advantages over sparse feature-point based approaches. The spatial regularization property of dense optical flow provides more stable motion information as compared to tracking sparse points and negates the effect of feature point outliers. We show superior results as compared to using sparse feature points alone.
Cite this article as:
S. Pathak, A. Moro, H. Fujii, A. Yamashita, and H. Asama, “Spherical Video Stabilization by Estimating Rotation from Dense Optical Flow Fields,” J. Robot. Mechatron., Vol.29, No.3, pp. 566-579, 2017.
Data files:
References