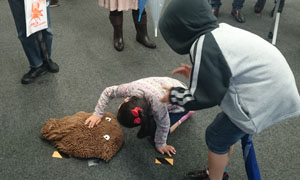 We have developed a self-propelling robotic pet, in which the robot audition software HARK (Honda Research Institute Japan Audition for Robots with Kyoto University) was installed to equip it with sound source localization functions, thus enabling it to move in the direction of sound sources. The developed robot, which is not installed with cameras or speakers, can communicate with humans by using only its own movements and the surrounding audio information obtained using a microphone. We have confirmed through field experiments, during which participants could gain hands-on experience with our developed robot, that participants behaved or felt as if they were touching a real pet. We also found that its high-precision sound source localization could contribute to the promotion and facilitation of human-robot interactions.
Cite this article as:
R. Suzuki, T. Takahashi, and H. Okuno, “Development of a Robotic Pet Using Sound Source Localization with the HARK Robot Audition System,” J. Robot. Mechatron., Vol.29, No.1, pp. 146-153, 2017.
Data files:
References