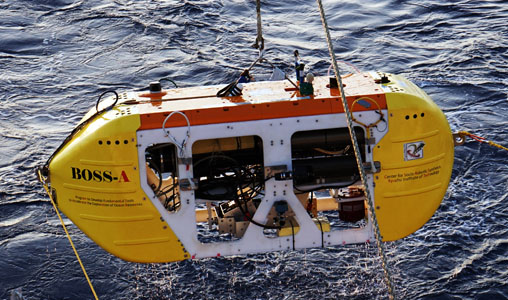 In order to effectively investigate the distribution and amount of cobalt-rich manganese crust (CRC), an autonomous underwater vehicle BOSS-A equipped with visual and acoustic instruments were developed. BOSS-A observes the seafloor along preset waypoints at a constant speed and altitude. Detailed 3D seafloor images can be obtained from the visual instrument, which employs a sheet laser and a camera. In addition, an acoustic instrument measures the CRC thickness beneath BOSS-A. The CRC at Katayama seamount was surveyed in February. The results visually presented the state and distribution of the CRC in this site and clarified the amount of the CRC. In the future, the authors will develop a more reliable thickness measurement method.
Cite this article as:
Y. Nishida, K. Nagahashi, T. Sato, A. Bodenmann, B. Thornton, A. Asada, and T. Ura, “Autonomous Underwater Vehicle “BOSS-A” for Acoustic and Visual Survey of Manganese Crusts,” J. Robot. Mechatron., Vol.28, No.1, pp. 91-94, 2016.
Data files:
References