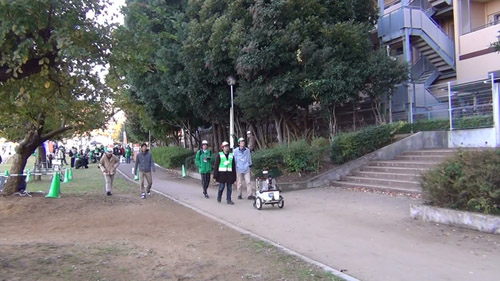 We describe a navigation method for autonomous mobile robots and detail knowledge obtained through Tsukuba Challenge 2014 trial runs. The challenge requires robots to navigate autonomously 1.4 km in an urban area and to search for five persons in three areas. Accurate maps are important tools in localization on complex courses in autonomous outdoor navigation. We constructed an occupancy grid map using laser scanners, gyro-assisted odometry and a differential global positioning system (DGPS). In this study, we use maps as a graphical interface. Namely, by using maps, we give environmental information, untravelable low objects such as curb stones, and areas in nonsearches for “target” persons. For the purpose of increasing the map reusability, we developed a waypoint editor, which can modify waypoints on maps to fit a course to a situation. We also developed a velocity control method that the robot uses to follow pedestrians and other robot by keeping safety distance on the course. As a result, our robot took part five of seven official trial runs to get to the goal. This indicates that the autonomous navigation method was stable in the Tsukuba Challenge 2014 urban environment.