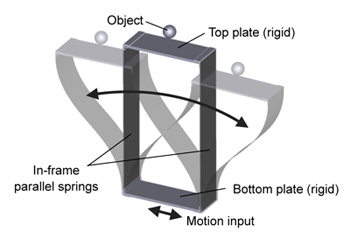 Robotic instruments have recently been widely introduced into industrial automation. As energy supply and demand have become global issues, energy saving in industrial robots has become urgent. In general industrial pick-and-place robots, servomotors periodically repeat acceleration and deceleration, consequently lose much energy in motion. We propose a mechanism using an in-frame parallel spring for the pick-and-place robot. During motion, spring blades deform and store energy, then release it as energy of motion, enabling the mechanism to recycle energy that have been lost in conventional mechanisms. In this paper, a 1 DOF proof-of-concept prototype and preliminary feasibility tests are described. In this study, we applied in-frame parallel springs to a mechanism for pick-and-place robot. The parallel springs are fabricated from spring steel SK85M (Young’s modulus: 210 GPa) with 252 mm long, 50 mm wide and 0.3 mm thick. The results suggest that the prototype can achieve a repeated motion with the range of ±145.7 mm in 2.56 Hz by 1.17 W, greatly reduced from that of the the traditional mechanisms. In addition, it is desired to stop the robot immediately in regular motion if anomalies occurred in industrial applications. The prototype showed that an immediate stop in 0.6 s was feasible by dissipating elastic energy stored in spring blades, confirming the feasibility of our proposed mechanism.