The Journal of Disaster Research (JDR) has published many special issues in addition to its regular issues. These special issues have included various papers that have covered disasters comprehensively. Among them, the Special Issue on “Tsunami Forces and Effects on Structures” in Vol.4 No.6, 2009 and the Special Issue on “Uncertainties in Tsunami Effects” in Vol.11 No.4, 2016 include practical papers on tsunami disasters which contribute greatly to tsunami disaster control. The members of the JDR editorial board have unanimously agreed to present this second JDR Award to the editor of the special issues:

I met Professor Harry Yeh for the first time while doing a field survey on the earthquake and tsunami that struck Flores Island, Indonesia in December 1992. He was already a world-renowned researcher, known for his theoretical tsunami research based on accurate hydraulic experiments. I remember that I was deeply impressed with his energetic attitude towards the survey as he worked to reveal phenomena on the disaster site. Since then, I have accompanied him on various disaster surveys, and I have listened to his unique and significant opinions on tsunami studies at many conferences. The two special issues mentioned above reflect his broad range of knowledge and experience.

On behalf of the JDR editorial board, I wish to thank Professor Harry Yeh for his efforts and to congratulate him as the winner of the second JDR Award.

I am honored to receive the JDR Award and am very grateful to the editors and staff members of the Journal of Disaster Research. I am also deeply indebted to the authors who contributed their excellent papers to the two special issues that I had the privilege of guest editing. One issue focused on tsunami forces and effects on structures (Vol.4 No.6) and the other on uncertainties in tsunami effects (Vol.11 No.4). I organized these special issues in cooperation with professors Shuto1 and Sato2, without whom I could not have achieved such fruitful special issues. So this award must be shared with both professor Shuto and professor Sato.

The Journal of Disaster Research was founded in 2006, immediately after two impactful disasters: the 2004 Great Indian Ocean Earthquake and Tsunami, and the 2005 Hurricane Katrina. The founding of the journal was very timely, and I was inspired when I was invited to serve as an international member of the editorial board. Recognizing that research in natural hazards must be trans-disciplinary and interwoven with expertise in geophysics, engineering, and social sciences, I felt it was difficult to locate a proper arena for reporting research findings. And because natural hazards do not recognize national borders, I felt it was crucial that research be conducted with close international collaboration.

In the Journal’s early days, it published collections of papers originating mostly from Japanese research activities. But contributions from other countries have increased dramatically, and today the Journal is in the process of establishing an exceptional reputation, attracting truly outstanding research articles from around the world. The Journal of Disaster Research now serves as an excellent dissemination outlet for cutting-edge natural hazard and disaster research, and I intend to continually contribute to this exemplary international journal.

The second JDR Award ceremony was held in Kasumigaseki, Japan, at November 22, 2016 and the certificate was given to the JDR award winner, Prof. Harry Yeh of Oregon State University (Prof. Shinji Sato of the University of Tokyo received it as a dupty). We congratulate the winner and sincerely wish for future success. 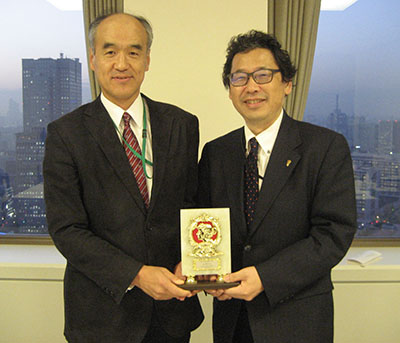 Photo: JDR Award certificate was handed from the Editors-in-Chief, Dr. Haruo Hayashi (right) to a duputy of the winner, Prof. Shinji Sato. 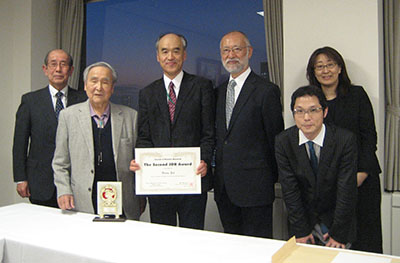