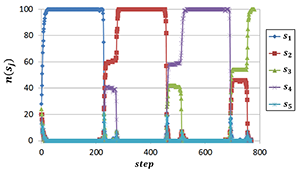 Dynamics of the decision making process

The best-of-n problem (BSTn) is a collective decision-making problem in which a swarm of robots needs to make a collective decision about a set of n choices; specifically, to decide what choice offers the best alternative [1]. The BSTn captures the structure and logic of the discrete consensus achievement problems that appear in several swarm robotics scenarios. Although numerous algorithms have been proposed recently to deal with more than two choices, the number of choices that can be dealt with is not large. The bias and raising threshold (BRT) algorithm proposed by Phung et al. [2] enables swarms to deal with a large number of choices (n≫2). However, the algorithm’s goodness has not been evaluated in any practical problems, and it is necessary to evaluate the algorithm in a problem where a large number of choices exist. In this paper, we consider the best of proportions (BOP) problem; that is a version of BSTn in which a large number of choices can be dealt with by adjusting the values of different proportions. In previous research on swarms that needed to solve the BOP problem, there is only a study on the response threshold models for the division of labor. In the present study, we investigate a scenario of the BOP and apply the BRT algorithm to find the best proportion. In our previous work [3], a fixed proportion setting method has been adopted. Here, we adopt a stochastic proportion setting method to verify the relationship between the efficiency and the number of choices in a more general case. The results show that with a larger number of choices, the decision making becomes more efficient with high equality; that is a result that has not been found in [3].