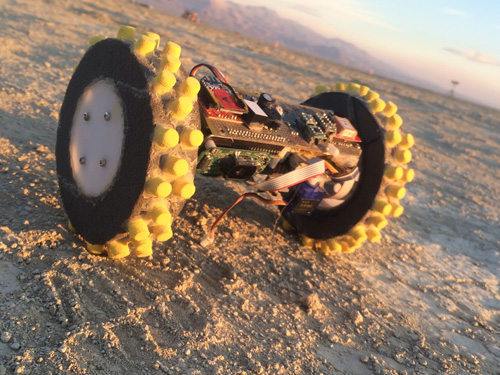 Contributing toward continuous planetary surface exploration by a rover (i.e., a space probe), this paper proposes (1) an adaptive learning mechanism as the software system, based on an exploration-biased genetic algorithm (EGA), which intends to explore several behaviors, and (2) a recovery system as the hardware system, which helps a rover exit stuck areas, a kind of immobilized situation, by testing the explored behaviors. We develop a rover-type space probe, which has a stabilizer with two movable joints like an arm, and learns how to use them by employing EGA.

To evaluate the effectiveness of the recovery system based on the EGA, the following two field experiments are conducted with the proposed rover: (i) a small field test, including a stuck area created artificially in a park; and (ii) a large field test, including several stuck areas in Black Rock Desert, USA, as an analog experiment for planetary exploration. The experimental results reveal the following implications: (1) the recovery system based on the EGA enables our rover to exit stuck areas by an appropriate sequence of motions of the two movable joints; and (2) the success rate of getting out of stuck areas is 95% during planetary exploration.