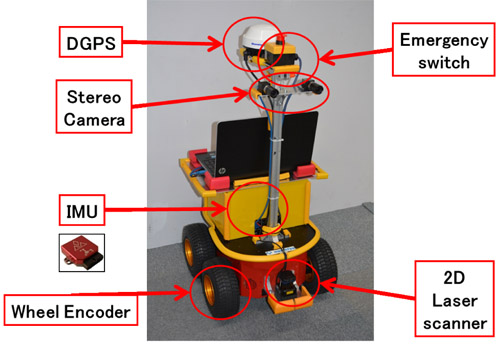 Mobile robot with a stereo camera

Autonomous mobile robots has been an active research recently. In Japan, the Tsukuba Challenge is held annually since 2007 in order to realize autonomous mobile robots that coexist with human beings safely in society. Through technological incentives of such effort, laser range finder (LRF) based navigation has rapidly improved. A technical issue of these techniques is the reduction of the prior information because most of them require precise 3D model of the environment, that is poor in both maintainability and scalability. On the other hand, in spite of intensive studies on vision based navigation using cameras, no robot in the Challenge could achieve full camera navigation. In this paper, an image based control law to follow the road boundary is proposed. This method is a part of the topological navigation to reduce prior information and enhance scalability of the map. As the controller is designed based on the interaction model of the robot motion and image feature in the front image, the method is robust to the camera calibration error. The proposed controller is tested through several simulations and indoor/outdoor experiments to verify its performance and robustness. Finally, our results in Tsukuba Challenge 2014 using the proposed controller is presented.