Founded in August 2006, the Journal of Disaster Research (JDR) reached Vol.10 this year. Regular issues are published bimonthly, six times a year. Special editions on the 2011 Great East Japan Earthquake are published once a year, with four of the five issues planned having been published.

The JDR’s features lie in its broad spectrum of subjects and the comprehensiveness of their treatment. These points are extremely important in dealing with disasters, but may lose focus in the selection of article content and have difficulty in evaluating it.

From its inception, the JDR has made each issue special, focusing on certain topics and inviting specialists in the area to serve as (guest) editors of each issue. Thanks to the cooperation of such specialists, the JDR has developed being able to reach Vol.10 this year.
To mark this anniversary, the JDR has established the JDR Award, an idea originally proposed by one of our editors, Shinji Egashira.
We feel that having a broad spectrum of subjects is fitting as the selection criterion for the JDR Award, but this has made it difficult to set up objective selection criteria.

A major factor in selection has been the number of downloads. Both of the two-part articles on the special issue on “Enhancement of Earthquake and Tsunami Disaster Mitigation in Peru” in Vol.8 No.2 and Vol.9 No.6 ranked among the top ten downloads in the almost 60 JDR issues published thus far.

Each issue derives its significance from the relevance of the featured topic, so members of the editorial committee have unanimously agreed to present this first JDR Award to the guest editors of the special issue:

On behalf of the JDR editorial committee, I wish to thank them for their efforts and to congratulate them as the first winners of the Award.

We are most honored to have been selected as winners of the First JDR Award – an unexpected surprise because we did not realize that we had contributed so much to the Journal of Disaster Research (JDR). The JDR provided us with a fine opportunity to present our results on a project of the Science and Technology Research Partnership for Sustainable Development (SATREPS), making our work known to the world-wide scientific community. SATREPS is sponsored by the Japan Science and Technology Agency (JST) and the Japan International Cooperation Agency (JICA).

From 2010 to 2015, Japanese and Peruvian researchers conducted a SATREPS project, Enhancement of Earthquake and Tsunami Disaster Mitigation Technology in Peru. To announce our research output, we chose the JDR and had our work published in 36 articles in two special issues, in 2013 and 2014. The JDR’s prompt peer reviews and publication processes are really helpful to projects such as SATREPS, which have time limits. Our results would otherwise have been published much later.

Congratulations on the JDR’s first-decade anniversary! We believe the JDR is an important journal in the natural hazard and disaster management field as it has been recognized as a Scopus indexed journal. The JDR’s open access and the fact that it enables papers to be downloaded free of charge from the web site is very helpful and convenient to readers and helps authors become known to broader audiences. We hope the JDR will get the Impact Factor of Thomson Reuters, becoming a major source of information in the disaster sciences field.

The first JDR Award and JDR 10th anniversary ceremony was held in Kasumigaseki, Japan, at November 11 and the certificate was given to the one of the JDR award winners, Prof. Fumio Yamazaki.
We congratulate the winners and sincerely wish for future success. 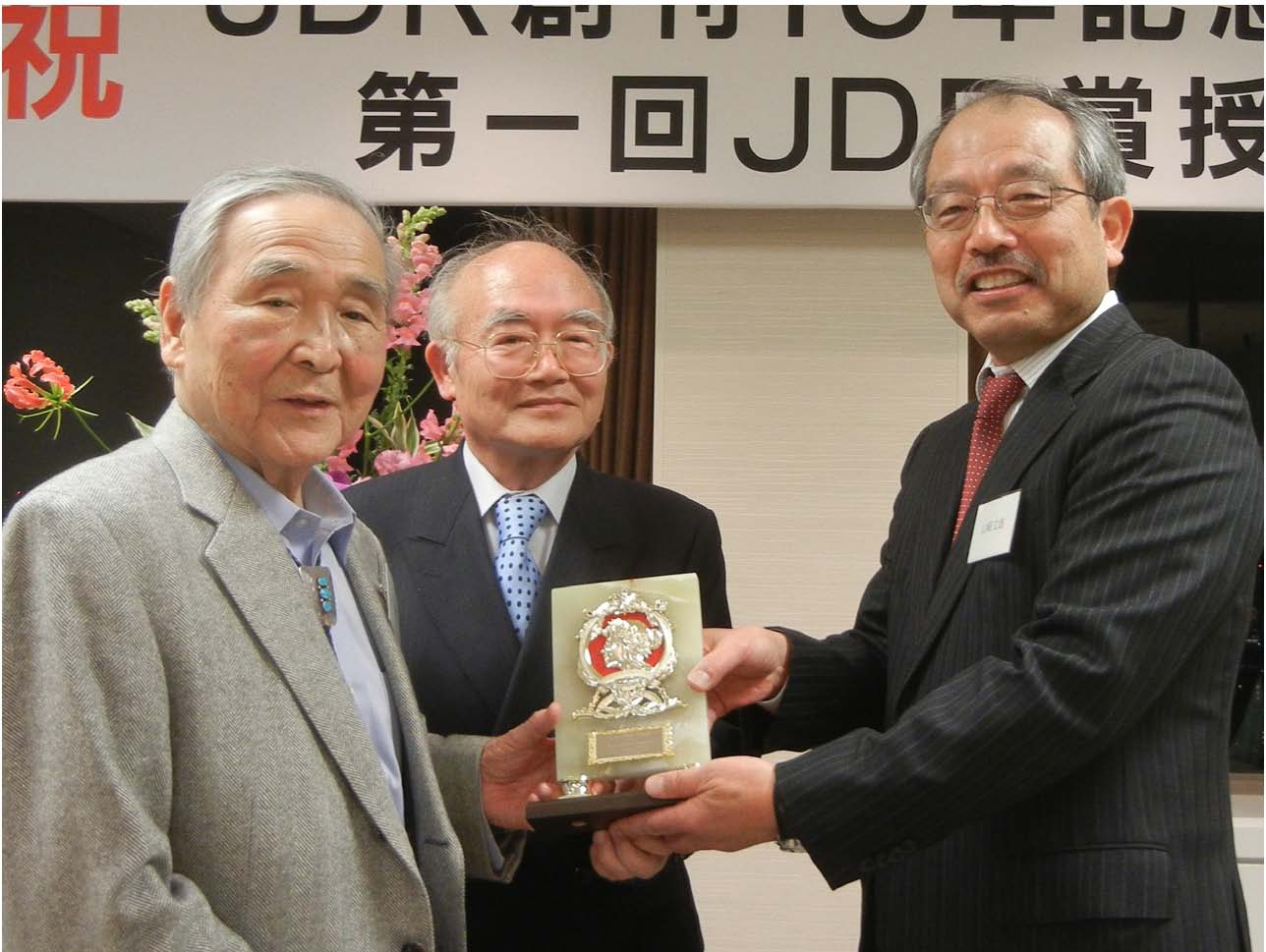 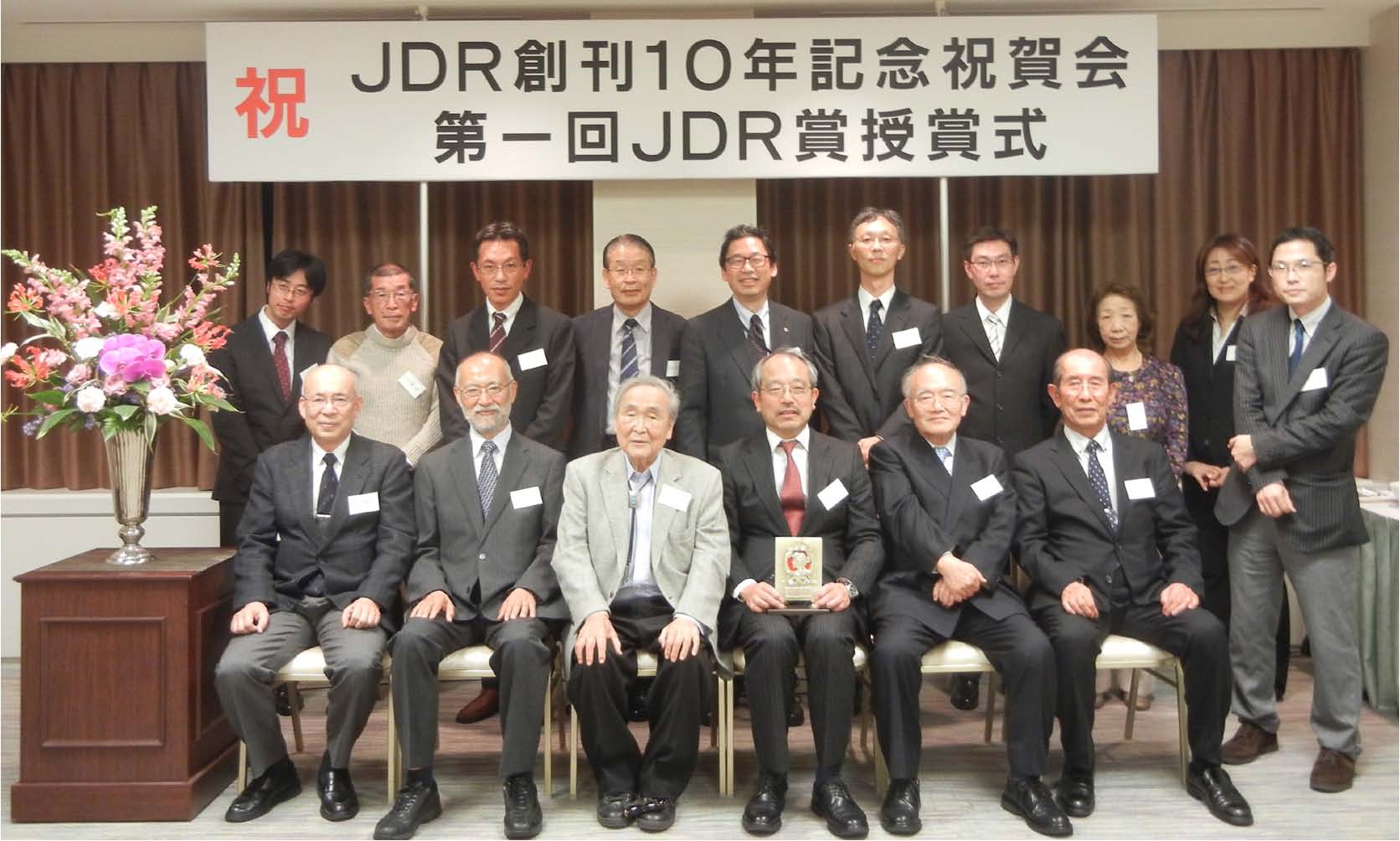 Photo: Participants for the award ceremony.